An ancient civilization in the Dead Sea region was wiped out by an apparent “airburst” meteor explosion with nuclear force that destroyed cities and salted the land about 3,600 years ago, leaving it uninhabitable for centuries, scientists said in a study published this week, and postulated that it might have inspired the Biblical account of Sodom’s destruction.

The results of the multi-year study by a multidisciplinary team of scientists from the Tall el-Hammam excavation project in Jordan were published Monday in Nature Scientific Reports, a peer-reviewed online journal.

Evidence of sudden death and widespread destruction that caused buildings to collapse, melt pottery, and left behind a barren, charred landscape, led to the conclusion that the surrounding towns and settlements were destroyed by a larger explosion than the 1908 explosion over Tunguska, Russia, where a meteor exploded with 1,000 times more energy than the atomic bomb in Hiroshima.

The findings help solve the mystery of why one of the most productive agricultural regions that supported tens of thousands of people for more than 3,000 years died suddenly and remained barren for several hundred years .

He also perhaps offers a source for the Biblical account of the destruction of the city of Sodom which was described in Genesis 19: 24-25: This is how he overthrew those cities and the whole plain, including all of them. those who lived in cities, as well as the vegetation of the country.

By registering, you accept the conditions

According to the Bible, God decided to destroy Sodom because of the wickedness of its inhabitants.

“Destruction of Sodom and Gomorrah” by John Martin, 1852. (public domain, via Wikipedia)

The study notes that there is an ongoing debate as to whether Tall el-Hammam could be the biblical city of Sodom, saying this issue is “beyond the scope of this investigation.”

â€œNonetheless, we wonder if the oral traditions of the destruction of this urban city by a cosmic object could be the source of the written version of Sodom in Genesis. We are also examining whether the details recounted in Genesis reasonably match the known details of a cosmic impact event, â€the study said, concluding that it was likely.

“The description in Genesis of the destruction of an urban center in the Dead Sea region is consistent with the fact that this is eyewitness testimony to a cosmic explosion,” the study says, noting that this corresponded to their conclusions on “stones fallen from the sky; fire came down from the sky; thick smoke rose from the fires; a great city was laid waste; the inhabitants of the city were slain; and the crops of the region were destroyed.

The study also notes that the description of the Destruction of Sodom is unique. “There are no known ancient writings or books of the Bible, other than Genesis, which describe what could be interpreted as the destruction of a city by an air blast / impact.” 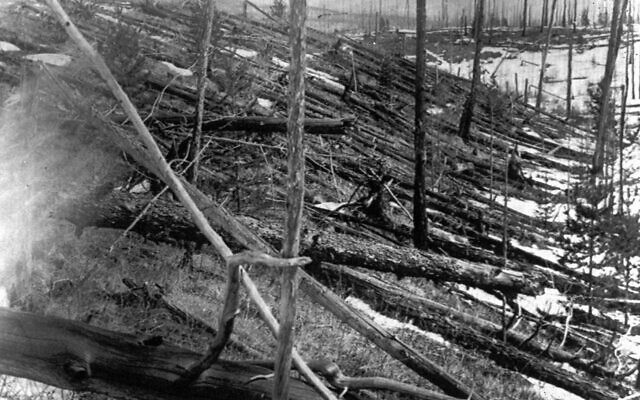 In this 1953 file photo, trees litter the Siberian countryside 45 years after a meteorite struck Earth near Tunguska, Russia. The explosion of 1908 is generally estimated to be around 10 megatons; it razed some 80 million trees for miles around the impact site. . (AP photo, file)

To reach their conclusions on the cause of the destruction of Tall el-Hammam, the scientist investigated 14 main pieces of evidence, including the discovery of pottery and bricks that melted at extremely high temperatures, diamond-like carbon formed at high pressure and temperature, and proof of minerals that have melted at temperatures over 2,500 Â° C (4,500 degrees Fahrenheit.)

The study looked at other possible causes like war, earthquakes and volcanic eruptions, but concluded that while they might have explained some of the findings, only a meteor flurry could explain them all. 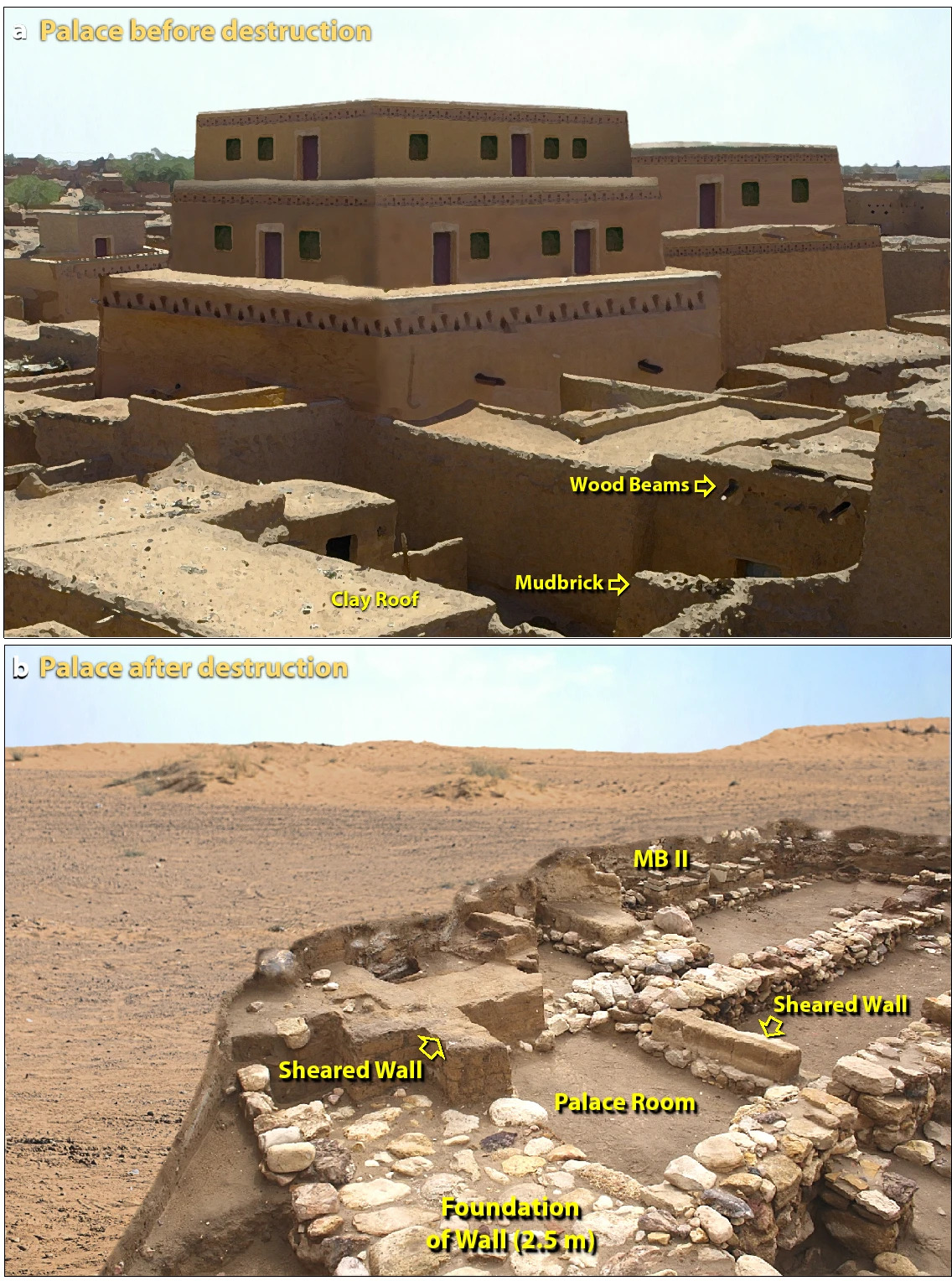 Example of catastrophic leveling of the palace of Tall el-Hammam. Image A shows an artist’s evidence-based reconstruction of the 4-5 story palace and Image B shows millions of mud bricks from the upper parts of the palace and other buildings are missing. (Creative Commons CC-BY-4.0 https://www.nature.com/articles/s41598-021-97778-3/figures/2)

They also discovered human remains so badly destroyed and scattered that they could only have been caused by a massive nuclear-type explosion.

“The circumstances and condition of the bones and human fragments suggest that at the time of death, these individuals were going about normal activities inside the palace, on the upper ring road and / or on the rampart above the road, where they were struck. by a high temperature thermal pulse, followed by a hyper-speed shock wave from a catastrophic cosmic explosion, â€the study found, noting that the most similar event recorded in modern times was the explosion aerial to Tunguska.

In 1908, a massive explosion near the Stony Tunguska River in Siberia razed some 2,000 square kilometers of uninhabited taiga forest. Oddly enough, no crater has been discovered and scientists explain the strange phenomena through a meteor explosion about 5-10 km above the earth. 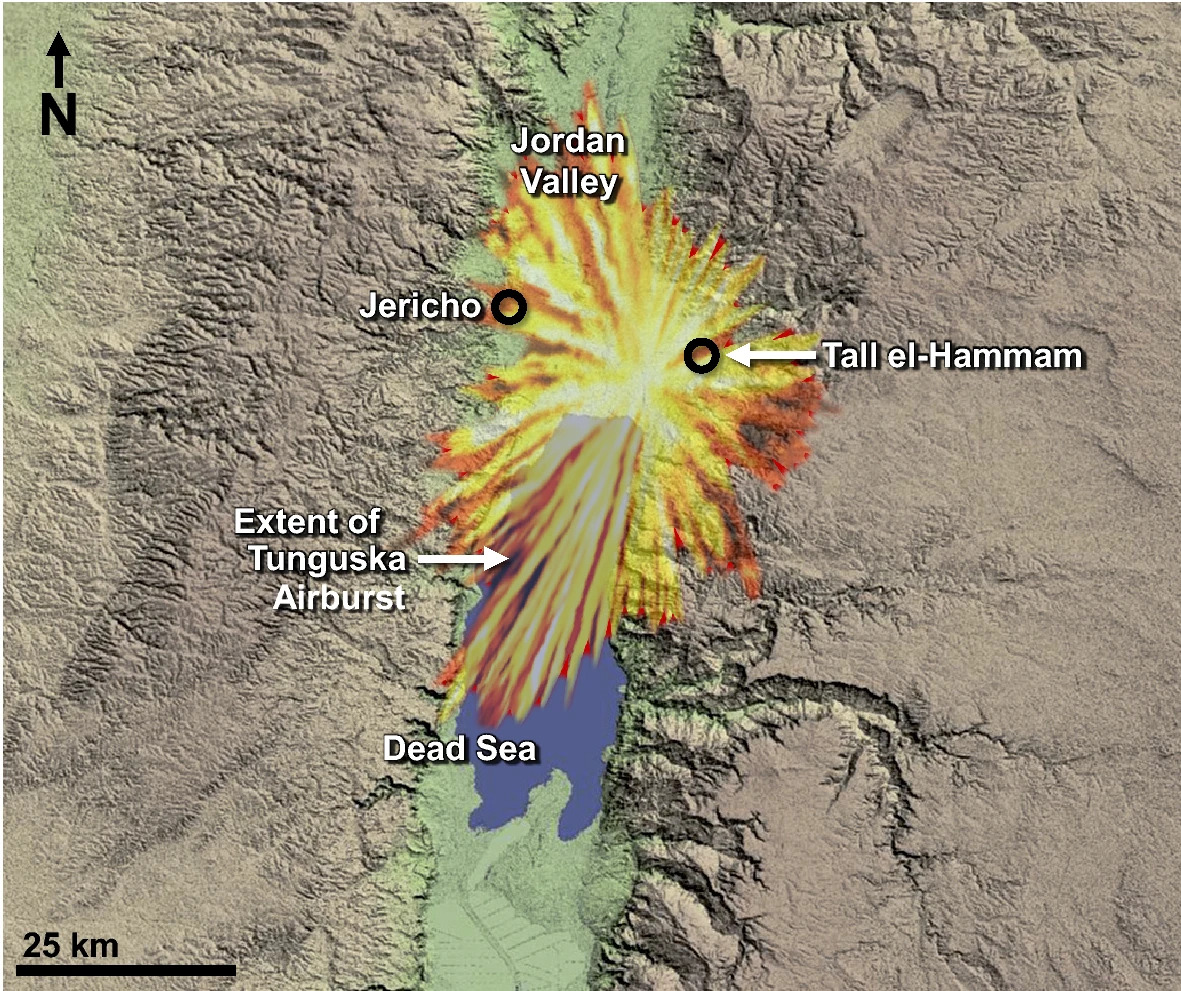 The scientist also found that the reason the area remained abandoned for so long after the cataclysmic event was due to a sudden increase in salinity in the land, which made it unsuitable for agriculture for several hundred years.

â€œThis centuries-old abandonment is particularly puzzling, given that this area contains the most fertile agricultural land within a radius of hundreds of kilometers across Jordan, Israel and Palestine. The destruction was so remarkable and pervasive that the name that followed became Abel, the “ground of mourning,” the newspaper notes, claiming it could not have been caused by a regular event, but by “a catastrophe. regional ending the civilization that depopulated more than 500 kmÂ² of the southern Jordan Valley for three to seven centuries.

The study hypothesized that a gust of air over the very salty Dead Sea may have distributed “hypersaline water” throughout the region. 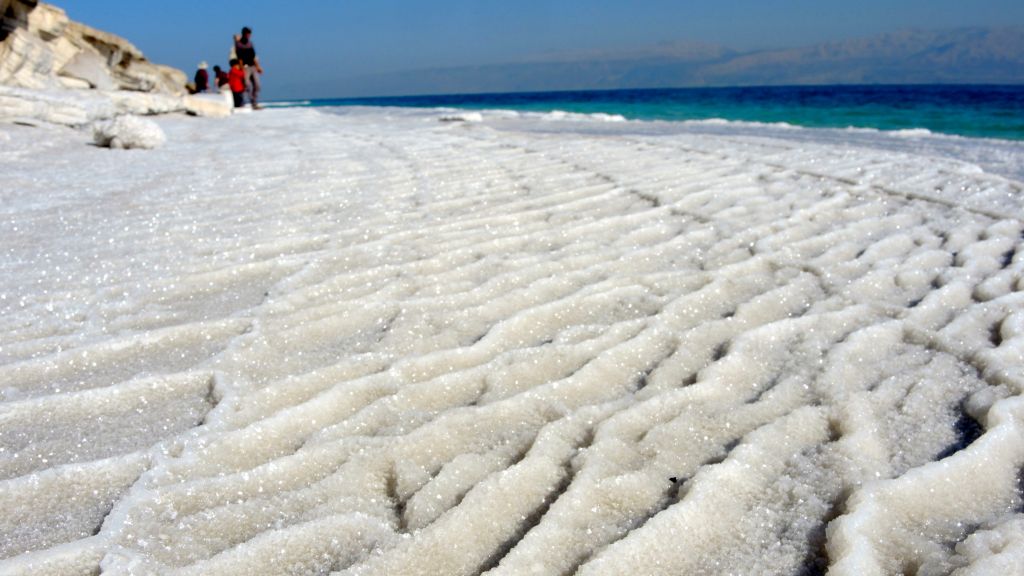 Saltworks on the shores of the Dead Sea, January 11, 2017 (Melanie Lidman / Times of Israel)

“Any survivors of the blast would have been unable to grow any crops and therefore would likely have been forced to abandon the area,” the study said, noting that the land may not have become arable again until after about 600 years.

The peak in salinity in the area provides an additional connection to the biblical account of Sodom. When Lot and his family fled the city, his wife disobeyed God and turned to see the destruction, where she was punished and turned into a pillar of salt.

According to a 2013 article in the Revue d’archÃ©ologie biblique by the co-director of Tall el-Hammam, Dr Steven Collins, the site of Tall el-Hammam is a strong candidate for the biblical city of Sodom due to a multitude of factors. The disaster discovered, and its precise location, which he links to the biblical references of “ha-kikkar(Or idiomatically, the plain).

Collins writes that the massive catastrophe was etched into collective cultural memory and preserved in biblical tradition. 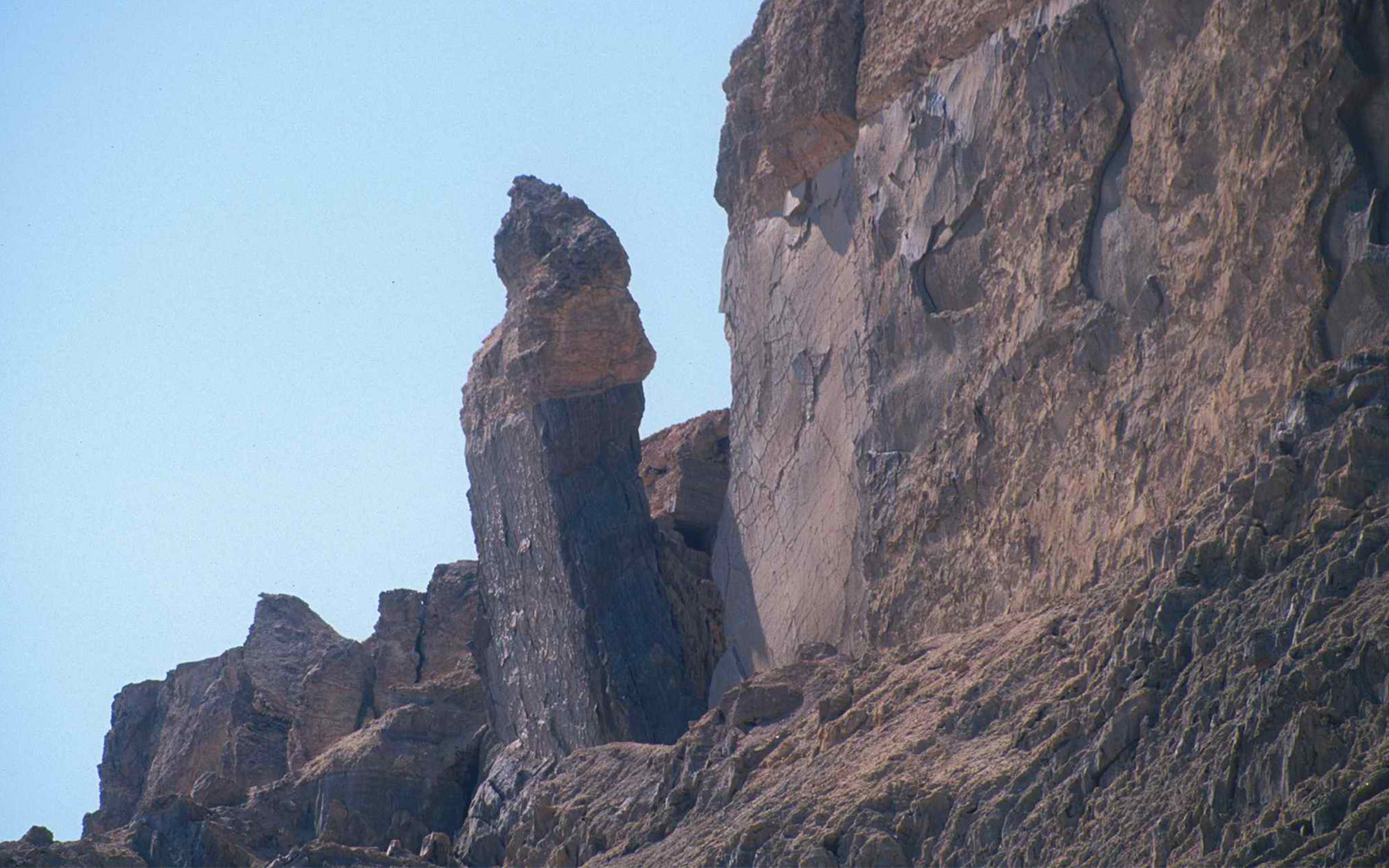 A pillar said in biblical tradition to be Lot’s wife on Mount Sodom near the Dead Sea. (Shmuel Bar-Am)

â€œThe memory of the destruction of the ha-kikkar, with its large population and vast agricultural land, was preserved in the Book of Genesis and ultimately incorporated into a traditional tale which, relying on the layer of ash that covered the destruction of one of its great cities, remembered a place consumed by a fiery catastrophe that came “from the heavens” (Genesis 19:24), “he wrote. â€œThe Bible gives the name of the city: Sodom.

However, other scholars – especially Christian biblical authorities – have challenged the identification of Tall el-Hammam and its destruction as the site and inspiration for the story of Sodom, citing both its location and its dating. as issues to integrate into the biblical story.

â€œIn my opinion, this is an example of evidence gathered to support the identification of the site as Sodom, instead of letting the site speak for itself,â€ archaeologist Robert Mullins, chairman of the department of Bible studies from Azusa Pacific University told Christianity today after the study was published.

They concluded that â€œthis explosion / impact hypothesis would make Tall el-Hammam the second oldest known city to have been destroyed by an explosion / impact event that claimed many human lives, after Abu Hureyra, Syria â€some 12,800 years ago.

Amanda Borschel-Dan contributed to this report

Depth of relationship with America will be ...