Allied with Sa’ar, Gantz sets out to break the “soft right”

While Israel has an extremely diverse political landscape, with 13 parties in the current Knesset, modern Israeli politics has often been a battle for that median voter, or what commentators call the “soft right.”

At this point, it is important to note that the right and left in Israel today are not what foreign readers may be used to. In Israel, the right and the left are generally not defined by economic ideologies or social platforms. Instead, the words “right” and “left” have become markers of identity (and of course insults), often revolving around attitudes towards peace, the Palestinians and, more recently, issues relating to democracy and to the judicial system.

There’s also a high degree of ‘tribal identity’ – whether you were born into a right-wing family in Netivot or a left-wing family in North Tel Aviv, the data suggests your children and neighbors will vote the same . Economics, fiscal policy, and debates over big government versus small government do little to delineate Israel between right and left, nor does the question of religion and state. Israel, for example, has secular, right-wing, self-defining parties and religious parties whose welfare policies (and voting habits) may be firmly on the left.

Many pollsters and strategists (including the authors) have conducted polls and focus groups in an effort to map and define the “soft right” – demographically, geographically and psychographically.

Some features and models stand out. Voters tend to be more traditional in terms of religiosity and more hawkish on security and peace. In many focus groups, we also encountered traditional Likudniks, like Benny Begin or Dan Meridor, who had simply lost faith in party personalization.

But perhaps the most unique characteristic of this part of the electorate is that there is no defining characteristic. This is your median voter. This is the closest Israel has to a norm.

So what does that leave at the center? Well, judging by the median voter, or maybe even the mean voter, the soft right is the center.

Then-Prime Minister Benjamin Netanyahu, right, speaks with Defense Minister Benny Gantz, both wearing protective masks due to the ongoing COVID-19 pandemic, during a meeting of the cabinet in Jerusalem, June 7, 2020. (Menahem Kahana/Pool Photo via AP)

Since the collapse of the Oslo peace process in 2000, the center of gravity of Israeli politics has shifted to the right. Polls show that around 40-45% of Jewish Israelis today define themselves as broadly right-wing, and 30-35% define themselves as center, center-left and left. The remaining 20-25%, including the median voter, consider themselves “centre-right”.

Every prime minister of the past two decades could, to some degree, claim to lead this camp of the median voter, from the Kadima governments of Ariel Sharon and Ehud Olmert through the early years of Benjamin Netanyahu’s second term.

Short-lived parties have also emerged with real success to appeal to this amorphous group of voters; from Yosef (Tommy) Lapid’s Shinui party, which won 15 seats in 2003, to Moshe Kahlon’s Kulanu in 2015. Lapid’s son, current interim prime minister Yair Lapid, also tried to seize the space of the soft-right median voter upon entering politics, and again after leaving government in 2015. 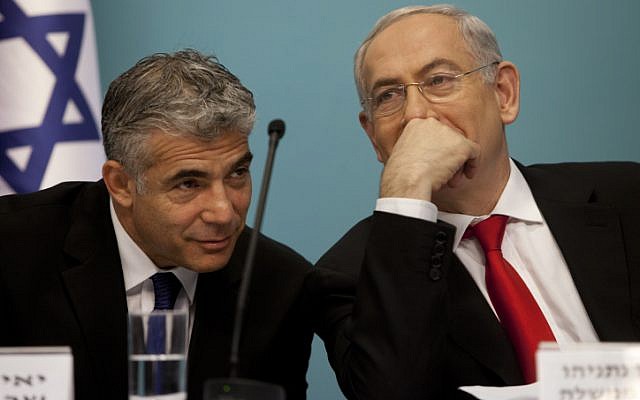 In recent years, as Netanyahu has gradually moved away from that median voter, flirting with extremist elements, anchoring his governments to the ultra-Orthodox and attacking the judiciary and the rule of law, a fertile patch of soft right-wing ground was left for the taking.

It is in this context that last week’s Blue and White-New Hope merger should be considered. By choosing Gideon Saar (and refusing a merger with Labor in view of the last elections), Benny Gantz and his Blue and White party are seeking to seduce this median voter. With Lapid now firmly on the center-left, Gantz and Sa’ar hope this partnership can better position their slate to win over “soft-right” voters and ultimately lead the center-right camp. 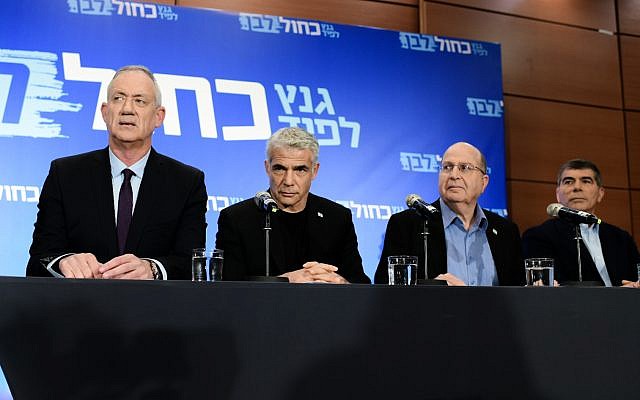 For Gantz, there is nothing new here. His first decision after joining politics was to join Moshe Ya’alon, another former right-wing Likud leader. And throughout the three election campaigns in which he led the centrist bloc, Gantz always sought to position the party slightly to the right of center.

This was accentuated by the fallout from his decision to form a unity government with Netanyahu in 2020, which pushed former centre-left and centrist Blue and White voters into Lapid’s arms, while those leaning towards the right mostly stayed with Gantz.

This week’s poll, giving the party 13-14 seats, comes as no surprise. New parties tend to sound well when announced, but that support often slips away. Indeed, last time out Saarland’s New Hope plummeted 19-6 in the space of a few months, while veteran Tel Aviv mayor Ron Huldai’s Israelis party polled nearly double the numbers when announced, only to completely disintegrate within weeks. .

While the direction of travel may not always be one-way, party strategists will be keen to avoid the same direction of drift as the new alliance becomes old news, with its 13-14 seats gradually ebbing to high numbers. (where Blue and White were probing before the partnership was announced).

To a large extent, however, the number of seats the new party wins is less important than the seats it wins. In heavily bloc-dominated Israeli politics, taking just one or two seats from the opposing bloc can be worth more than 10 or 20 seats within one’s own bloc.

If we take the example of Saarland’s New Hope in the last round of elections: while it may have only won six seats, the result was enough to prevent Netanyahu from forming a coalition and laid the groundwork for a historic – albeit short-lived – broad unity government.

While their goal this time around is to win at least double that number of seats, he and Gantz hope their alliance will pave the way for a similar outcome this time around. One that denies Netanyahu the 61 seats he needs to form a government, and instead allows the formation of a broad national government, led by the center-right (ideally by Gantz himself). 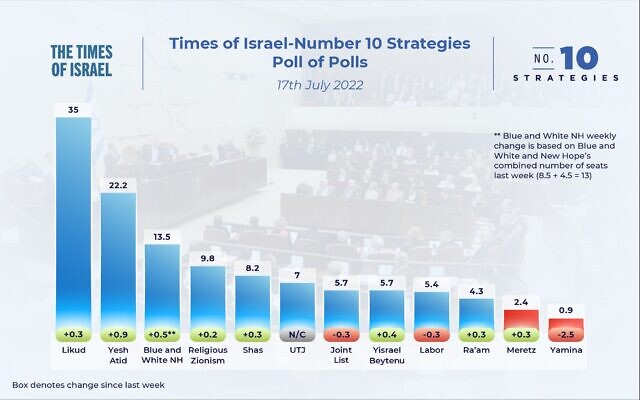 The State of Israel’s Election Campaign: Poll from July 17, 2022, showing how many seats parties are expected to win if elections were held today, based on a weighing of the latest opinion polls.

While the Blue and White-New Hope alliance dominated the political conversation this week (at least until the arrival of US President Biden), it did little to change the polling landscape.

In our polling survey, the party currently sits at 13.5 seats, an increase of 0.5 seats from the parties’ combined total last week (8.5 + 4.5). When it comes to mergers in Israel, the prevailing wisdom is that 2 + 2 usually add up to 3 (i.e. the two parts combined are less than the sum of their parts). At this point, the two combined are pretty much exactly the sum of their parts. 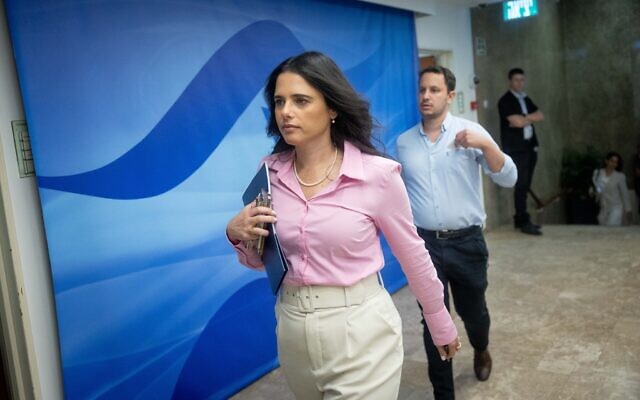 Interior Minister Ayelet Shaked arrives for a cabinet meeting at the Prime Minister’s Office in Jerusalem on May 15, 2022. (Yonatan Sindel/Flash90)

The big trend – as opposed to the big news – this week is the fall of Yamina, now under the leadership of Ayelet Shaked, who has failed to clear the hurdle in each of the last five polls. This has the effect of driving up all the other parties. Of the other 11 parties, eight rose this week in our average, two fell and one remained unchanged. The biggest beneficiary at this point is Yesh Atid, which has gained almost an entire seat in our average over the past week.

As for the blocs, the Netanyahu bloc (Likud, religious Zionism and Haredi parties) is currently in the process of securing exactly 60 seats, an increase of one seat from last week. The current coalition votes with 54.2 seats (down 0.4 from last week). (For a refresher on the methodologies behind and the pitfalls of these polls, see last week’s article on making sense of opinion polls.)

Simon Davies and Joshua Hantman are partners at Number 10 Strategies, an international strategy, research and communications consultancy, which has surveyed and conducted campaigns for presidents, prime ministers, political parties and major corporations in dozens of countries on four continents.